Theme: Impact of COVID-19 on Neurology

The conference aims to bring together all researchers, scientists, students, professionals working in the field of neurology and. Neuroscience 2021 will offer a wide range of scientific sessions consisting of keynote lectures, plenary sessions, poster presentations, and e-poster presentations.

Neuroscience 2020 aims to bring together neurologists, psychologists, professors, researchers, as well as students and all those who are trying to understand brain function and psychology from around the world, providing them with a platform to discuss the different new and innovative. This year's conference will provide a basis for networking with eminent personalities.

Neurology is the branch of medicine that deals with disorders of the nervous system, which include the brain, blood vessels, muscles, and nerves. Autonomic, central and peripheral nervous systems are the major areas of neurology. Diseases, disorders and injuries that involve the nervous system often require the care and treatment of a neurologist.

Clinical psychology deals with the assessment of abnormal human behavior and its treatments. The common method of treatment for this type of abnormal behavior is talk therapy or psychotherapy which was first developed by psychoanalyst Sigmund Freud; he was the first to insist that mental illness can be treated by talking to patients.

Neurobiology is the branch of biology that deals with the functions and structures of the nervous system. Specifically, neurobiology focuses on cells and tissues of the nervous system and the ways in which they can form structures and circuits (pathways) to control the body.This system includes common structures, such as the brain and the spinal cord, and the nerves. Neurobiology can be classified as a sub-discipline within the larger field of physiology.

Neurogenetics studies the role of genetics in the development and function of the nervous system. The field of neurogenetics arose out of advances in molecular biology, genetics and the desire to understand the connection between genes, behavior, the brain, and neurological disorders and diseases.

Neurosurgery is a specialization that treats diseases and disorders of the brain and spinal cord. Back pain can sometimes produce neurological symptoms such as numbness, muscle weakness, due to poor coordination of the nerves. These symptoms indicate that neurosurgery is needed to treat conditions that cannot be treated with normal methods. Neurosurgery includes discectomy, laminectomy, and spinal fusion surgery. There is often a higher risk of nerve damage and infection that can lead to paralysis.

Psychopedagogy deals with the behavior of a person during the learning process from a cognitive aspect. Educational psychology helps the teacher to understand the development of his students, the extent and the limits of their learning capacities.

Applied behavior analysis is a type of treatment process that primarily focuses on improving a specific behavioral process. Unlike most therapies where they try to explain why and how the person behaves the way they do, applied behavior analysis attempts to replace bad with good; he uses positive reinforcement to make that change. This method of therapy is mainly applied to autistic patients.

Mental disorders (or psychological disorders) are conditions that affect your thinking, feelings, mood, and behavior. They can be occasional or long-lasting (chronic). They can affect your ability to communicate with others and to function every day. The causes of mental disorders are often not clear. Theories can incorporate findings in a range of areas. Mental disorders are generally defined by a combination of the way a person behaves feels, perceives or thinks.

Biological psychology is the only branch that says that there is an underlying physiological cause for all of our emotions, thoughts and feelings. For example, the release of oxytocin in women leads to binding behavior, etc.

Growing awareness and the need for home care have encouraged the global population to adopt smart wearable devices such as smart watches and smart bands for seamless monitoring and recording of patient health data through a wireless interface. Additionally, recorded health data can be shared with healthcare professionals for better patient outcomes. Wearable neurology devices are used for the continuous detection and monitoring of patients with neurological disorders such as seizures and PD. The US FDA has already approved a portable MHealth device, Embrace2, which uses advanced machine learning technology to detect electrodermal activity in patients. This development should have a positive impact on the overall growth of the market. 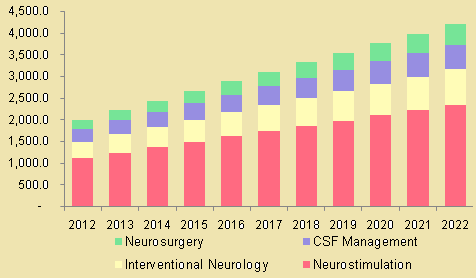 For diagnostic imaging and neuroscience research, MRI is the best tool. It provides morphological images with the highest spatial resolution and unmatched soft tissue contrast, as well as unique central nervous system (CNS) functional information. 97% of MRI sites perform brain scans and 1 in 4 MRI scans are of the brain, making it one of the most common tests performed in neurology. Neurological uses of MRI systems include diagnosing tumors of the brain and spinal cord, infections, and vascular irregularities, which can lead to stroke.

According to the Brain Aneurysm Foundation, approximately 6.5 million people in the United States have an unruptured brain aneurysm, or 1 in 50 people. The annual rate of rupture is approximately 8 to 10 per 100,000 people. There are nearly 500,000 deaths worldwide each year from brain aneurysms, and half of the victims are under the age of 50. Hence, the increasing demand for neuroimaging devices and the increasing research activities in the field of neuroscience are contributing to the growth of the market in North America.